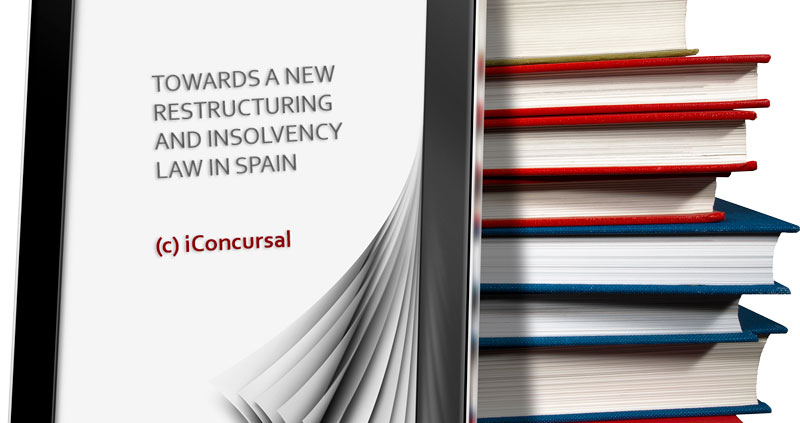 In the middle of the pandemic, Royal Legislative Decree 1/2020 of May 5 was published, approving the revised text of the Insolvency Law, which came into force on September 1, 2021, with the urgency of taking a further step to adapt Spanish legislation to Directive (EU) 2019/1023 of the European Parliament and of the Council of June 20, 2019, whose maximum term ended in July 2020, and which was extended for one year until last July.

After the deadline and now with the purpose of transposing the aforementioned EU regulation, a Preliminary Draft Bill for the Reform of the Consolidated Insolvency Law has been presented, dated July 8, with the purpose of complying with the mandate to adapt the regulations of each member country to Directive (EU) 2019/1023 of the European Parliament and of the Council, of 20 June 2019, on preventive restructuring frameworks, on discharge of debt and disqualifications, and on measures to increase the efficiency of procedures concerning restructuring, insolvency and discharge of debt, and amending Directive (EU) 2017/1132 (Directive on restructuring and insolvency) (link).

Article 3 of the Directive to be transposed states that,

For the purposes of the first subparagraph, Member States may make use of up-to-date IT technologies for notifications and for communication.

(a) alert mechanisms when the debtor has not made certain types of payments.

(b) advisory services provided by public or private organizations.

(c) incentives under national law for third parties with relevant information about the debtor, such as accountants, tax and social security authorities, to flag to the debtor a negative development.

The draft bill includes this institute, but the early warning system to be implemented is not known, and its explanatory memorandum states that it will be regulated by ministerial order of the Ministry of Finance, leaving its regulation postponed, and that, according to what is stated in the provision that mentions it, what is planned is not in line with the purpose pursued by the Directive, thus.

Ninth final provision. Early warning system with the information of the State Agency of the Tax Administration and the General Treasury of the Social Security.

The Directive allows (i) that early warning systems can also be implemented by private associations, public law corporations, and non-profit organizations, but this does not seem to be the intention of the legislator, who reserves it exclusively for State administration organizations, (ii) that access to certain early warning tools is available not only to what the Draft Bill calls taxpayers, but also to interested third parties, such as workers’ representatives, (iii) and that it is a tool for companies and individual entrepreneurs, and not only for companies.

The early warning system is a challenge for the administration so that, if it is to be operational, it provides reliable, easily accessible and useful tools so that the interested party can make diligent decisions about the state of its business and avoid, preventively (teleology of the institution) the future situation of insolvency and can request assistance and help from third party professionals to facilitate its recomposition.

Of course, the administration should certainly not fall into the temptation, which it is already showing signs of by naming the subject of the information as a taxpayer, showing only the debts, deferrals and instalments owed to the Treasury or the Social Security, which, moreover, are well known, and, in a generic way, referring to the laws and procedures for refinancing and restructuring of the debt.

The usefulness of this figure must be exclusively for what has been foreseen in the Directive, which is to provide the debtor with tools for assessing its situation and future projection in order to warn and prevent an insolvency situation, and not as a measure to even sanction the debtor-entrepreneur for not using those that may have been made available to it and not allowing it to discharge the unsatisfied liabilities (EPI, formerly BEPI); as indicated in Article 140 of the Preliminary Draft, 487 of the future Law. One thing is that the employer has acted in bad faith (an indeterminate legal concept to be defined in this matter) and another that the fact of not using these tools is indicative evidence, to be assessed by the judge, of an action punishable by the non-exoneration of its debts; since, strictly speaking, it would be a legally enforceable obligation and not a mere tool for assessing the economic health of its activity.

The administration should encourage and set up this institution following the early warning systems already adopted by European countries that have advanced in this solution, such as Denmark (Early Warning Denmark EWD) that implemented it already in 2007 to provide impartial and confidential information to companies in difficulties that may become insolvent.

In the future, it should become part of the business culture to use the early warning system when there is a suspicion of being in a compromised situation, to become aware of the risk and to obtain free or paid advice.

It is up to the administration to foster this culture and, for it to be effective, to provide it with functional tools that serve its purpose, as the best measure of economic and social policy, which can mean the survival of companies and the maintenance of jobs. Tools that are indispensably IT, computerized, algorithmic, like those that support other early warning systems for assessing future risks.

Moreover, as in other countries, the early warning system should not be left to the central administration alone, but other institutions, such as universities, chambers of commerce or similar, should be allowed to enter. Thus, in Denmark, Erhvervshus Midtjylland, the Intermunicipal Business House (link), and in Europe the Early Warning Network (link), whose partners include the Community of Madrid.